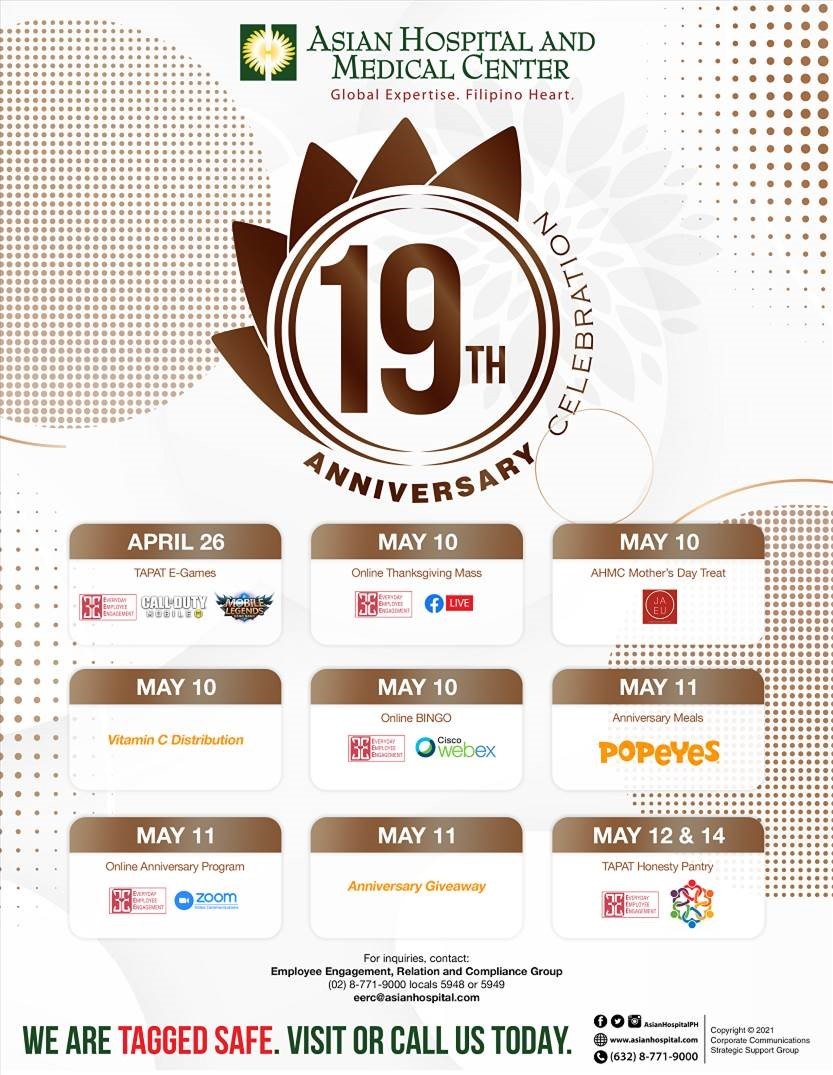 The date May 11, 2002 is a day memorable for the community as this was the day Asian Hospital and Medical Center (AHMC) was founded. 19 years later, it has grown so much and has achieved three Joint Commission International gold seals of approval where it is composed of a multidisciplinary team of medical professionals, and the best among the best hospital staff that have braved through tough times.

Despite what happened for more than a year that we are in the midst of a pandemic, we are fully demonstrating faith in the Lord and at the same time, we are recovering from the battle we are facing today.

The 19th anniversary of Asian Hospital should be celebrated with the preparations prepared by the Human Resources Department and their programs and activities to show the unity of the employees and keep a smile on their face.

The anniversary celebration activities began last April 26 with the TAPAT E-Games where famous games like the Call of Duty and Mobile Legends were the featured games. The administrators of the Everyday Employee Engagement (3E) Facebook group posted the teaser and announcement poster last April 19 and also posted the participating departments who are part of each games.

A day before Asian Hospital’s 19th anniversary, an online thanksgiving mass was held in celebration of the upcoming event. AHMC’s Chaplain Fr. Eric Terrel presided the mass and this was broadcasted LIVE at AHMC’s Facebook page which was also simultaneously broadcasted via the 3E page.

To celebrate Mother’s Day, an exciting treat awaits all AHMC mothers as JAEU sponsored the food that they received. To strengthen the immune system of all Asian Hospital employees, a vitamin c distribution was held at the 6th Floor Training Room, Tower 2 where representatives of each department claimed their supplements orderly. To top it off, during lunch break, an Online BINGO was held via the Cisco WebEx platform where each employee is entitled to one BINGO card for the duration of the whole game.

The 19th Anniversary commenced with the anniversary meals brought by Popeyes and an online anniversary program hosted by the Department of Dermatology Consultant Dr. Aivee Teo, including an anniversary giveaway for the employees. On May 12 and 14, a TAPAT Honesty Pantry will be open from 6:00 AM to 6:00 PM where the different groups are to choose from the materials they need.

Asian Hospital’s 19th year is one the community celebrated especially now that they have lived through a pandemic and is still battling it every day.